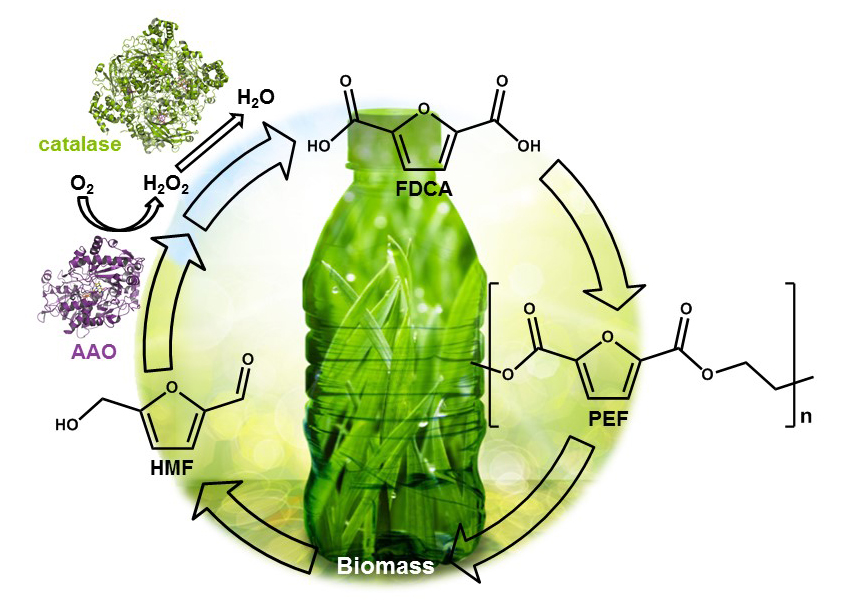 Researchers from the CIB group of Biotechnology for Lignocellulosic Biomass, in collaboration with the NMR and Molecular Recognition group of CIB, have recently achieved the complete oxidation of 5-hydroxymethylfurfural (HMF) to 2,5-furandicarboxylic acid (FDCA) catalysed by the enzyme aryl-alcohol oxidase (AAO), a type of oxidase acting on the alcohol and aldehyde groups of benzylic compounds. This work has been carried out in the frame of the EnzOx2 European project, which focuses on the development of new biochemical technologies for the production of value-added compounds from biomass components.

HMF is a highly valuable platform chemical that can be obtained from plant biomass carbohydrates by hydrolysis, isomerization and dehydration treatments. HMF can be oxidized to FDCA, a compound that has been classified as one of the top 12 value-added chemicals derived from biomass, because it is the renewable precursor for the production of poly(ethylene-2,5-furandicarboxylate) (PEF), the polymer expected to substitute for petroleum-derived poly(ethylene-terephthalate) (PET) plastics in the near future. For this reason, the search for a feasible production of FDCA from lignocellulose biomass, still at the niche level, has gained interest in the last years, including biotechnological methods as an alternative to the chemical synthesis.

The conversion of HMF into FDCA involves three consecutive oxidation steps, with several enzymes being able to catalyze some of the individual reactions. On one hand, some oxidases act on the alcohol or aldehyde groups of these compounds, requiring only molecular oxygen as co-substrate. On the other hand, some peroxidases/peroxygenases can hydroxylate some of these compounds at the expenses of hydrogen peroxide. Thus, smart combinations of several of these enzymes have been reported for the production of FDCA from HMF. However, the application of enzymatic cascades has some disadvantages, such as the need to combine the different optimal operational conditions of each enzyme (for example, pH and temperature).

It was known that the AAO enzyme used in this work efficiently catalyzed the first two steps in HMF to FDCA conversion, but it was then unable to perform the last oxidation reaction, leading to the accumulation of 2,5-formylfurancarboxylic acid (FFCA). In this study, the CIB researchers investigated the reasons for this lack of activity and discovered that hydrogen peroxide, the by-product of the two first oxidations, was inhibiting FFCA oxidation, preventing the production of the desired product FDCA. Real-time reactions in absence and in presence of catalase followed by H1-NMR confirmed the production of FDCA when the hydrogen peroxide is removed by the action of catalase. Therefore, the control of hydrogen peroxide levels during the reaction, by adding catalase, resulted in 99% conversion of HMF into FDCA by AAO. Moreover, under such conditions, several enzyme variants designed for improved performance were able to increase the rate of the last oxidation step, consequently decreasing the reaction times and reaching higher conversion yields.

Finally, the authors also looked more deeply into the oxidation of FFCA to FDCA by AAO, finding out that this is not produced by the known two-step mechanism releasing hydrogen peroxide, but through a new oxygenation mechanism not described so far for this enzyme.

The EnzOx2 project has received funding from the Bio Based Industries Joint Undertaking under the European Union’s Horizon 2020 research and innovation programme under grant agreement No 720297.