Using a panel of monoclonal antibodies (mAbs) generated several years ago in our laboratory [2] against mouse neurospheres (1), it was demonstrated that whereas mAb Nilo2 identifies adult neuroblasts(1-3), mAb Nilo1 identifies radial glia cells on the brain embryo and neural stem cells (NSC) in the adult brain(1, 2). Using these mAbs coupled to paramagnetic nanoparticles, we demonstrated that in response to brain damage, there is a fast (within hours) an orderly migration in vivo of endogenous neuroblasts and NSCs towards the damage site(2, 3), although with an apparent different kinetics. Interestingly neuroblast and NSC migration seems to be a general trait in response to brain damage. Although the physiological role of NSC and neuroblasts at the damage site remains to be unraveled (Figure 1) 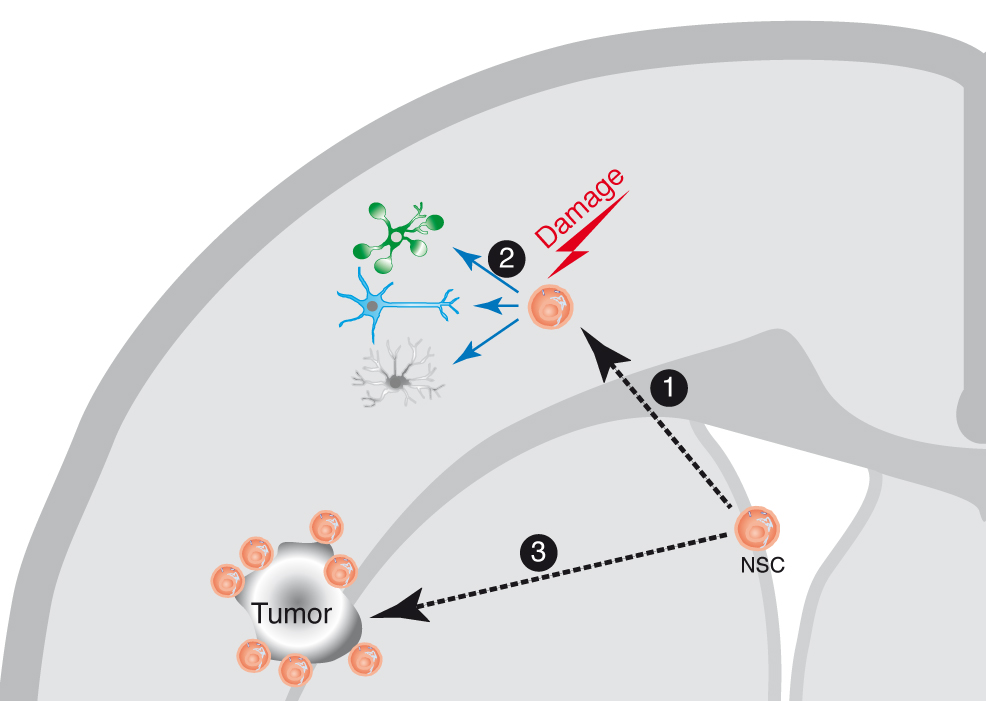 Figure 1 Neural stem cell (NSC) response to brain damage. The NSC in the adult brain are localized in their niche at the brain subventricular zone (SVZ). In response to a brain damage insult, the NSCs migrate 1 towards the damage site, where they can proliferate and generate differentiated cell types (neurons, astrocytes and glia) 2, on what seems to be a generalized response mechanism to damage. Similarly, during the growth of a brain tumor, the NSC migrate towards the tumor site 3, and can be visualized surrounding the tumor, although in this case there is no evidence for repair mechanisms. The NSC are not the only cells migrating in response to brain damage, since there is also evidence for the migration of neuroblasts towards the damage sites, although not depicted in the cartoon for clarity.(this figure and its legend are reproduced from reference (4)).

Physiological role of NSC and neuroblast migration in response to brain damage:

Taking into account that after the migration of NSCs and neuroblasts in response to a brain puncture with a stereotaxic needle, most of the cells filling the needle track fail to express NSC or neuroblast markers, whereas in response to a lysolecithin-induced focal demyelinated lesion, re-myelination could be confirmed by the presence of O4+ or myelin+ cells, it can be hypothesized that either NSC and neuroblasts at the damage site trigger the migration of differentiated cells towards the site, or, most likely, these cells differentiate in situ to generate the appropriate cell types, to repair the damage (4). At this time, we cannot formally distinguish between these possibilities, but it is clear that the models and tools described, together with in vivo labeling of proliferating cells might allow to establish the cellular mechanism(s) involved in damage repair.

In addition, migration of NSC or neuroblasts in vivo could be used as a biomarker to identify the focal sites on the brain affected by epileptic seizures or neurodegenerative processes such as Parkinson’s or Alzheimer’s disease (4).

Expression of the antigen identified by mAb Nilo1 in subpopulations of human Glioma cells:

Nilo1 mAb in addition to identify mouse radial glia cells in the brain embryo and NSC in the adult brain, we have demonstrated that it identifies a subpopulation of cells in human primary gliomas(2) (Figure 2). Although likely, it remains to be formally demonstrated that Nilo1 mAb identifies the cancer stem cell population (CSC) in human gliomas, an hypothesis (4) that currently canalizes most of our efforts.

If indeed, we can demonstrate that Nilo1 identifies the glioma Cancer Stem Cells, it might represent the first opportunity of using an antibody against neural CSC surface markers as a therapeutic tool. In this regard, the presence of CSC was first demonstrated in vivo in glioblastomas, intestinal tumors, and skin cancer, using genetic tracing of the cells (5). The glioblastoma experiments further demonstrated that standard chemotherapy treatments induced tumor shrinkage, but the tumors quickly returned. If chemotherapy was administered at the same time that the CSC were sup- pressed using a genetic trick, the tumors shrank back into “residual vestiges” that did not resemble glioblastomas (6). Thus, these data draw attention to the relevance of treatments using the neural CSC as a target, as it would be the case for Nilo1-derived drugs.

the use of mAbs recognizing surface markerson either NSC or neuroblasts open up a series of possibilities (Figure 3), for example, they allow to purify these cells from cell suspensions, identify them in their niches, or demon- strate in vivo their migration towards damage sites. In addition allows envisaging the possibility of identifying the focal sites on epileptic brains after a seizure, or on initial stages of Parkinson’s or Alzheimer’s diseases by the migration of NSCs towards the damage sites. Finally, if the mAb anti-NSC recognizes the CSC in human gliomas, it might turn out as the first therapeutic drug targeting neural CSC. 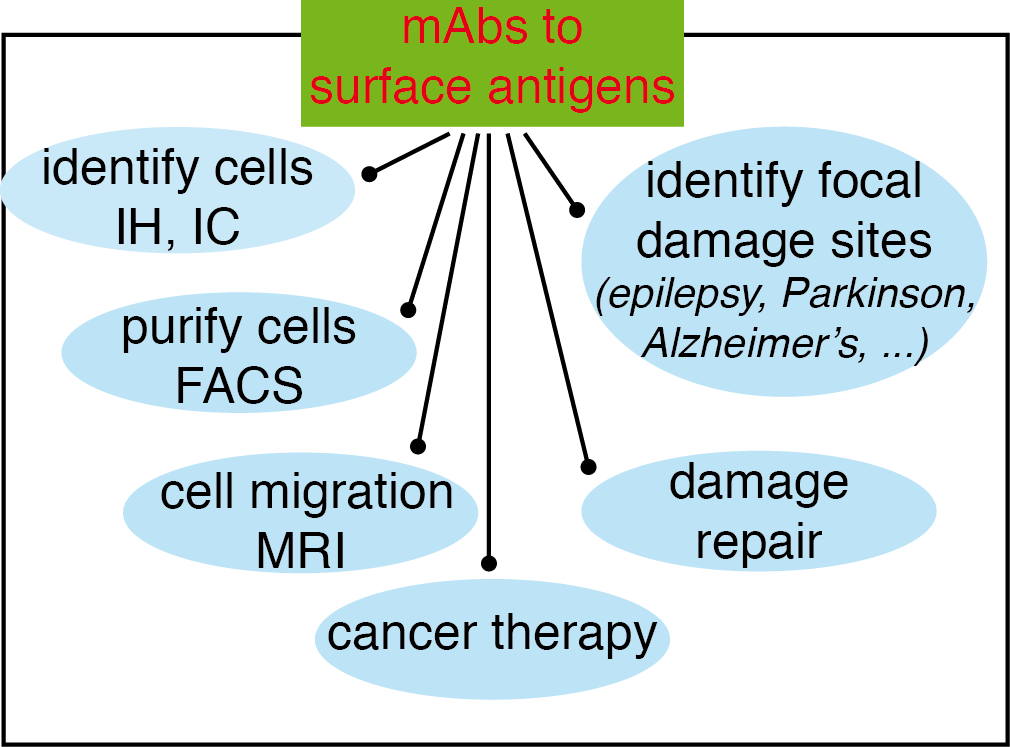 Figure 3 Possibilities opened-up by the use of mAbs recognizing surface antigens in neural stem cells (NSC) and neuroblasts. The main advantage of using mAbs identifying surface receptors in NSC and neuroblasts is that they can be used experimentally on live cells, or even in vivo, in addition to immunohistochemistry (IH) and immunocytology (IC), to identify the cells bearing these antigens and purify them (or deplete that population) by fluorescence-activated cell sorting (FACS); to use them in vivo, after coupling to magnetic nanoparticles, to identify cell niches or to analyze cell migration; to analyze the repair mechanisms in response to a damage insult; to identify focal damage sites on epileptic seizures or on neurodegenerative diseases such as Parkinson’s or Alzheimer’s disease; and  finally, if they identify the appropriate antigens on the neural cancer stem cells as therapeutic tools for cancer therapy (this figure and its legend are reproduced from reference (4)).

[1] This project is partially financed by the Ministry of Economy, Industry and Competitivity and FEDER funds from the EU